Muslims are not terrorists * Please read * 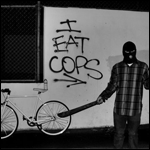 Its retarded to think like that I'm a Christian and I say every religion has its bad and good people, none is perfect, thats why we are humans.

After reading your post, I've come to the conclusion that the only one that's retarded is you.  How the fuck do you misspell "speak", oh yeah by living in a third world country that has zero education